Weasel’s Jazz at the End of the Night is the perfect mix of horrendously depressing and astoundingly relatable, which—in its own way—is horrendously depressing. His stories chronicle the lives of men on the brink of their worst: some who stumble beyond their limitations, and others who succumb to them—some willfully, some not quite so much.

Yet, regardless of whether or not the protagonist faces death, there is an eerie realness in the stories that, even if a reader personally cannot relate to the situation, they may still find themselves floating in his incredibly pungent air of despondency. Weasel’s word choice dances from crude and straightforward to emotional and profound depending on the voice of the narrator; some are vulgar, others scared, all incredibly broken in their own unique ways, many in love—equally as heartbreaking. A particularly stark description that resonated with me even as I closed the book was that of Drake: “An embodiment of how many bruises you can have and pretend they don’t exist.”

Descriptions such as Drake’s can be found in each of Weasel’s close-to-home depressions, and often they equal in strength. There’s a feral quality to each story, whether it be about drugs, lost loves, found loves, or any other number of life-ruining circumstances; a reader can get lost in the sadness; even when progression comes to a halt in the middle of some pieces, his success in atmosphere keeps the reader lost in his narrators’ minds.

Another quality that took me by surprise (but ultimately ended up adding to my enjoyment of his collection) is the interwoven nature of the narratives. A character will see on the news the death of another, or fall asleep with someone else’s ex-boyfriend—these people are falling apart in their own special ways, and sometimes they share, sometimes they don’t. In this, there exists an all-too-familiar liminality as you watch them fall apart separate of one another, sometimes hoping the other made it out better than they did, sometimes not giving it a second thought. In these small ways, Weasel reiterates the desperate humanity of his creations, which lends masterfully to his collection.

Now, that’s not to say I do not have my critiques, though they are all small. The first is that many manifest their sorrows in similar ways. I can only read about cigarettes and shitty jobs for so long before it grows stale. I understand this to be a commonality of the impoverished expressed in his work, and, while I applaud his ability to remain consistent and shift his characters’ approaches and opinions regarding these similarities (and while said aspects are never the actual focus of the narrative’s hardship[s]), it still fell short in some areas that may have been expressed better otherwise.

The second is that the collection was exceptionally male-centric. Each story featured a male-identifying protagonist and their male-identifying partners (of some sort). Rarely were women ever present in a piece, and never the main character. This again leads to a sense of thematic repetition, though this time harder to ignore than my former complaint. In the simplest of terms, the collection could have benefited from a little more variety.

Ultimately however, the collection was a treat. I had it finished in three days, and the only reason I had to set it down was through no fault of the writing—in fact, it was quite the contrary. As said before, Weasel’s engulfing atmospheres and familiar characters invite the reader into the inner-workings of their minds and as such can create a difficult though sadly beautiful journey for an empathetic reader. Jazz at the End of the Night has imperfect characters in an imperfect world, and it is through these familiar imperfections that such a depressing read can be so satisfying when set down. 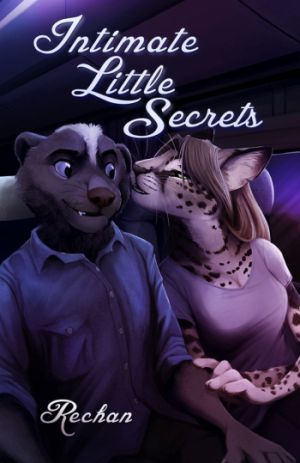 Review by Rakuen Growlithe Intimate Little Secrets (US$9.95 from FurPlanet) is an anthology of short stories written by Rechan with a cover illustration by Teagan Gavet. Originally I

Review by MikasiWolf Pussy Katnip can be compared to a superhero or a vigilante. And in some ways, the two are interchangeable. Except that her powers come not from a