Let me preface this review by saying that I got this as an ARC, so take it with a grain of salt. There's no guarantee that the final book, be it in title or in content, will be as I read it, and therefore your  experience might be completely different from mine.

Carnage. A museum, a haunted house, and a fitting name for the events described in this work. Carnage is a single-author anthology by Weasel from Sinister Stoat Press where a group of three friends get to experience in the flesh the exhibitions contained within.

CW: With a name like this, I won't go into detail of all the graphic violence and gore that it contains. Besides that, you can also expect such stuff as: Necrophilia, sexual abuse, cannibalism, self-harm, and many other things.

Since you cannot spell Carnage without "Car," the  anthology starts with "Hell on a Two-Lane Blacktop." In this story, we follow Rick, a psychotic panda in search of a new victim, the plot in a  way echoing that of Death Proof, but more violent, gay, and with the antagonist as the protagonist this time. A very good fit for the first story in this collection as it's bloody, with a villainous narrator, and an ending that could be considered bittersweet at best; setting the tone well for what's next to come.

Back in the framing story, our trio of protagonists get split into three halls. The first one, The  Unrevealed, paying more attention to the violence than the other two and having a more sexual connotation.

Starting this hall is "Toothache." With a very self-explanatory title, this is the story of the pit bull Barry and his many struggles with, well, a toothache. Out of this hallway, this could be considered the least sexual, or at least  the one where sex does not matter as much to the actual plot; with its  biggest saving grace being the way it plays with the typography, the only story in this collection to do so and with great effect.

Continuing  on this hall we have "Death Wish," my favorite of this set. This is the story of a wolf, using a hookup app to lure and seduce people before killing them, who meets his match in SluttySkunkBoi, his, well, newest match. The power struggle between both characters is a delight to read, mixing the horror and eroticism really well, not to mention that it has one of the most satisfying endings for me.

Last for this section we have "The Junkman." In this story we follow Gordi, a deer who's about to have his first face-to-face meeting with a coyote he met online, but he soon learns of the perils of online dating. Unlike all of the previous stories, this one starts to break from the mold by having a  slower pace and being less graphic; exchanging both of these elements for a slightly more expanded plot and character development. An enjoyable read, but definitely the weakest of its kind in this anthology.

With only two stories in it, the second hall, Absolution, has a more balanced mix of both types of stories presented in the previous one. "Desolation," its first story, follows JC, a horse trying to escape from his toxic relationship, and Riley, a rabbit who'll do anything in his power to stop that from happening. "Desolation" is more aligned to the same formula used by "The Junkman," focusing more on its characters than on graphic violence, yet doesn't neglect the latter as much as the previous one.

Second and last for this hall  is "Eaten Alive." This is the story of Zack, a meerkat who decides to  cancel his betrothal, only to later on be distracted by the screams coming from the shower where his ex-fiance was. "Eaten Alive" has the honor of being the only straight story in this anthology, but I'd say that's its only high point. Following the same formula used in the first  stories but lacking any of their charm, the bulk of this story could basically be described as nothing more than a mechanical description of the murder that takes place. No tension, no setup, and with forgettable characters, this is easily the worst story in the anthology for me.

Thankfully, the third and last hall happens afterward. With good plots, good character development, nice horror, and a length of around half of the complete work, the hall of Breaking Free / Letting Go has the best stories in my opinion. The hall starts with "Madness  Vase," the story of a couple who, after spending a night at the cemetery, start experiencing weird things in their home. While the story follows many common Haunted House tropes, I have to say that I loved the emotional beats throughout it and even more its outcome.

Following "Madness Vase" is "How Well You Walk Through Death." In this story we follow Axel, a lion who decides to go to the funeral of his abusive ex, but sometimes there are things that not even death can stop. Personally, my favorite story in this collection, not only for its slow-boiling  horror and its emotional impact, but also because it gave some hints on non-Cthulhu Lovecraft works. Bonus points for enby representation too.

Technically not part of this hall, but still fitting in, we have "Love in the Time  of Death." In this story we follow a stoat who decides to hook up with a cop in a zombie-infested world. As expected of this sub-genre, this story goes back to being more gore-y than the rest in this hallway, but I'd say its biggest shortcoming is how predictable it is, feeling a little disappointed with the ending since it felt like it was finally going into a different direction.

Last, but definitely not least, is "Down into the Inferno." This is the story of a bear with a mission:  finding Cliff, his deer boyfriend who disappeared after going to an extreme SM bar. Possibly the best story, at least from a horror perspective, not shying away from the gore but depending exclusively on it. There's mystery too, good sex scenes that enhance that plot, and incredible pacing. Very solid all the way around.

Overall, Carnage is a very good entry for the horror genre, and I don't mean that as just "furry horror." Brutal when it needs to be, emotional from time to time, and gut-wrenching all around, I'd say that most of these stories accomplished what they meant to do. Sure, it does have its lows and more than a few errors (as expected of an ARC), but I did have a nice time reading it. If you're squeamish, many of these stories might not be to your taste; but if you're into horror, you're likely more than ready to tackle all, or at least most, of them head on. 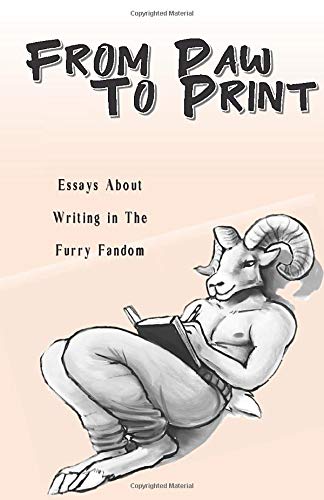 Review by Ardy Hart If you’ve ever wanted a conglomeration of great writing advice from established writers and publishers in the furry fandom, “From Paw to Print” is your 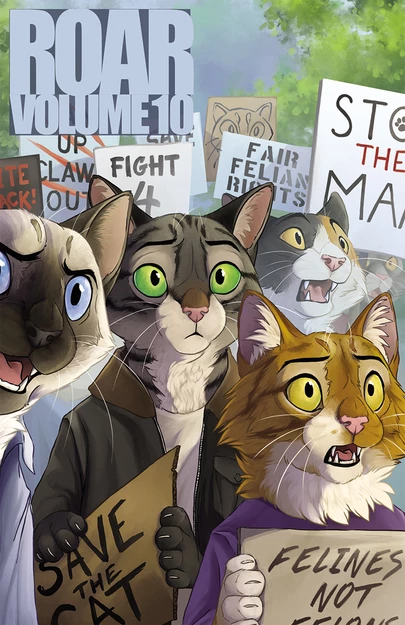 Review by Mamma Bear The ROAR franchise has a reputation for publishing high-quality SFW furry stories from some of the best writers in the fandom. ROAR 10 is one more