Finding a book of poetry that focuses on personal experiences on being a furry is often a rare occurrence. But I was excited when I learned about FURRY SLUT by Chazz Chitwood. Though a brief chapbook of poetry, the few poems that are in here were not in the least disappointing. But that’s something I would expect considering it is a 2020 Stonewall Chapbook Contest Winner. Published by Brickhouse Books, a non-fandom publisher, FURRY SLUT was overall a good yet lacking read.

At the start we’re treated to a poem called "Character Design" where the author gives us a set of rules for creating our own fursonas. Chitwood invites us into their world with the first line, “Aren’t you afraid of your own skin? It’s so lived in---” then later in the same stanza sets up the foundation of character design. Instead of describing what it means to create this character, they delve into what creates the best characters, shunning us away from Vampires, Dwarves, etc. Chitwood blends themes of Dungeons and Dragons bringing some of us who aren’t exactly furry but play tabletop RPGs into a sense of familiarity. There isn’t a better way to start FURRY SLUT.

Immediately we’re thrown into the author’s first meet up with a furry. "On Meeting My First Fur" is a layered poem, where we see what this first meet up actually brings out in the author. We have questions of queerness: “He knew even back then, / that I’d find ways to shirk humanity, / that I wasn’t as straight as I thought.” And because the wolf had “insisted,” a fox was created, and we feel every ounce of emotion when the poem ends with, “It’s been ten years, and I’m still jealous.” Chitwood, in a few short stanzas, brought us into the start of a relationship, the start of a fursona, and because Chitwood could not measure up the Wolf’s expectations, we feel all of their jealousy in a single line.

The start of this book makes you feel as if you’re getting an experience of self-discovering through the furry fandom, and in a way we do through personal poems. Poems such as “Lettering to Myself at 19” and “Purr.” We’re even given tributes to other furs that are affiliated with the author. But as we move further to the end of the book, we get a strong transhumanist theme pouring through the lines. Instead of flesh and bone, we’re treated to codes and liquid cooling. Leaving the body to become something robotic In “Mind/Matter” we see it in the first stanza “I am circuits scorched in meat. / I am charges bound in a bone cage. / I am digital signal in analogue flesh.” Like a snap of the finger we’re thrown into this theme of becoming more than human.

In the final poem of the book, the author poses a question to us. In “Instructions for transcending the Human Body,” Chitwood writes, “with how much of your life is data, how long until your social media presence is more you than you? When your computer knows you better than you do, when your thoughts are predicted five moves out --- won’t you wish you’d become a dragon too?” Which to me is like saying: with how far technology has come, why not become a dragon? Why not create your own character and join this exciting and new world. We’re left with an invitation and it’s up to the reader to decide whether or not to take it.

FURRY SLUT is a very well written chapbook of poetry, but there are things I wish it gave me as I read through it. I would have wanted a harder definition on what it is to be a “furry slut.” What was the author’s intention with that, and how did the title bring together the book? I think there are a lot of strong themes here, but would have liked a bit more cohesion to the chapbook. Towards the middle, I didn’t get why some pieces followed others, or why a piece was even included. I would have preferred maybe a couple more poems to really drive down the flow of the book. All that said, if the author were to release another book of furry poetry, I would probably be in line to grab it.

Review by Joel Kreissman TinyPrancingHorse’s (TPH) web serial “They Are Smol” started on the Reddit forum r/HFY (Humanity, F--- Yeah!), but unlike most stories on that board humans aren’t depicted as some sort of interstellar badasses. Rather, in this setting, humanity 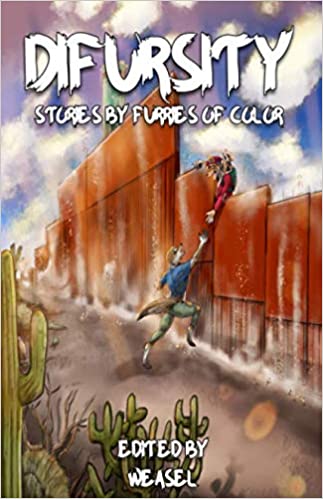 Review by Linnea ‘LiteralGrill’ Capps Difursity: Stories By Furries Of Color is a furry anthology featuring short stories written by BIPOC authors within the furry fandom. I remember being excited