Species: Wildcats is a recent installment in a series of short story anthologies arranged by theme according to their protagonist’s species. In Wildcats, our focus is on felines, and each story features a large cat character. The anthology opens with some public domain works, beginning with William Blake’s "The Tyger" followed by one of my favorite short stories of all time," The Lady and The Tiger?". Next up are a pair of folktales that add a nice touch of both lyrical language and dark grimness which perfectly captures the overall tone of the anthology.  The rest of the stories are reviewed individually below.

"Wanderlust" is the story of a bobcat ghost who befriends a tigress with a long history of being abused and subsequently abuses her. Because I was intensely triggered by this story, I am unable to give it an unbiased review aside from saying that it has some glaring tense issues that didn’t get caught in editing and that it very much needed a trigger warning for Abuse, Rape, and the way it portrays violence against women. [Editor's note at end]

"The Corvette Nedra" by Sonriah Thais:

The second “new” story in Wildcats is a science fiction story about a Felid Tiger stranded in a ship’s graveyard who attempts to steal a derelict ship with the help of its sassy A.I. This is a really cute and sweet story with a twist that, while somewhat guessable, was still really fun. It was a light, refreshing read to follow the opener, though it too suffered from the tense issues that, oddly enough, are sort of consistent across the first half of the book.

"On The Hunt" by Ferric the Bird:

This is another story with a sprit of fun behind it. It opens very originally with a protagonist who is playing out their sentence in Hell. We learn as we go that Jake is a demonic agent who is often sent back up to the world above to catch other demons who are breaking the rules. The opening scene in Hell was witty and delightful, and the story has a good pace and clean writing. I found the over-sexualization of all the female characters a little tedious, but it fit the theme and the character well.

"What It Means To Be Loved" by Isa Al-Ramad:

Here is an interesting inclusion of a pro-religion story in which a gay Lynx deals with his love for his husky friend. Instead of rebelling against his faith’s teaching that gay sex is “wrong,” the character follows the tenets to the letter. And this is where the story really challenged me. It is very sweet and gentle, and I found the description of the “three types of love” interesting. But while there are many valid and beautiful reasons for a protagonist to seek out a relationship without an erotic/sexual component, the fact that he did so because gay sex is “wrong”, made me intensely uncomfortable. I’m still attempting to digest this story and to parse where the line should lie between pro-religion and anti-gay. For me, this story left me sad and a little disappointed and so wasn’t quite a win. I would have loved to see a pro-religion story that highlighted the support, charity and forgiveness religion can provide rather than one that seems resigned to something that felt discriminatory.

"Fathers To Sons" by Mikasi Wolf

This was the first story in the book that hooked me entirely. It’s a tale abut a lion who has been conscripted into the service and his experience in boot camp. I loved the deep way we’re embedded in the character, the language, and the sensitivity of this story. It was one of the cleanest written pieces as well with a heartwarming ending and marked a distinct uptick in the stories in the book for me.

In Search Of The City Below by Thurston Howl

Start with a Siberian Tiger on a search for Atlantis, and you’ve pretty much won me over. Add in a skunk, some twists, and Howl’s lovely, solid writing and this story was all win. Like all the stories in the second half of Wildcats this one is well-written, enjoyable, and lovely.

"The Night The Stars Fell" by KC Alpinus

This story was a re-read for me as I’ve encountered it before in another publication. It is written in lush descriptive language and deeply embedded in culture and history. The tale relates the trials of Arrow Stars and her betrothed Obsidian Fang as they attempt to save their people from the influence and treachery of foreign invaders. The language is beautiful, and the treatment had a ring of authenticity to it that makes this story an absolute delight.

"Ember In The Night" by Ban Wynn Oakshadow

Farrah is a mystical tiger in the midst of one of his people’s most holy ceremonies. He is devout and has ascended to one of the highest levels he can attain in this existence, until one of the lowliest of creatures teaches him a profound and heartbreaking lesson about love, faith, and change. The tone in this story is delicious. The writing is rich and lyrical and, while a little slow at the start, so enjoyable to read. This story is poetic, and to me was the real gem of this anthology. I fell in love with both the message and the writing and it let Wildcats end on a very high note for this reader.

Overall, Species: Wildcats was something of a mixed bag. Most of the stories are well written and fairly polished, and I found a good mix of lightheartedness, sharp wit, and dark contemplation. It is, in my opinion, not a book for the very sensitive reader. But if one enjoys stories that really challenge them, maybe even keep them up late at night, then you will definitely find what you’re after here.

[Editor's note: Regarding the lack of content warnings, the publisher does apologize for this. Due to a moving situation at the time of formatting, it was definitely overlooked by Thurston Howl. However, THP has long been a proponent of including content warnings in creative projects, has done so both before and after this title but definitely dropped the ball with this one. So Thurston Howl humbly apologizes and promises to do better with that in the future. It is no fault of the editor.] 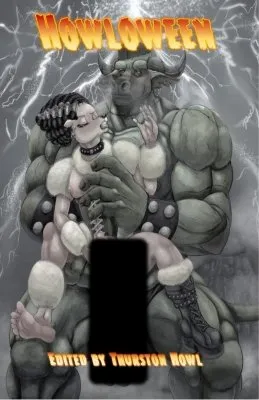 Howloween—not related to the con of the same name—is one of the latest anthologies by Thurston Howl Publications. This erotic-horror collection contains six short stories by different authors

Review by Linnea ‘LiteralGrill’ Capps I’m in the age group that might have found dirty magazines hidden under parents' beds before so many things went digital. Of course, I’