Cold Trailing is the second book in the “Fire Dog Trilogy.” I must preface this review by noting that I did not read the first book, Fire Branded, but only read the Andy Hart review before diving into this second installment.

Here, we return to the lives of Will, who works at the V-town fire department; his love interest, the mysterious mistress Anne; and Will’s friend, a cougar named Davies. V-town is what the residents call the former Vancouver, British Columbia, a place now mostly inhabited by anthros after some kind of Cataclysm killed off most humans. As noted by Hart in his review, the Cataclysm is never explained in either the first or now, the second installment. We don’t know if there was a war, a horrible pandemic, an environmental upheaval, a giant asteroid collision, or what. We do know that some humans have survived, but not many. In this book, we only meet one briefly. Most of the characters are furries. We don’t know how they got here, either. It seems that furries are a fairly recent arrival on Earth and that Will’s mother was human; his father, apparently, was a Dalmatian. We don’t know why or how Will came to be or why or how there are so many anthros now.

Anyway, our story begins with Will and Davies trying to control a fire on a coal-hauling ship in the harbor. It’s nice to start a tale by leaping into action and introducing two main characters. After tackling this conflagration and rescuing a couple of the crew, Will walks (yes, walks) to his home in the countryside where his Mistress awaits. Anne continues to be mysterious and has some sort of power over Will, including a sexual magnetism he cannot resist. We learn here that Anne is grooming Will to rise to department chief, which he soon does, and possibly more.

Suddenly, there is an earthquake that levels much of the city, especially any skyscrapers left over from the Cataclysm, and the City Hall is nearly destroyed. V-town is also troubled by riots, but the reason behind the riots, as with much of the action in this book, is never explained (they began before the earthquake), although it might be an excuse to introduce to the reader the tensions existing between the police and fire departments.

The world Gibbs has created is odd, to say the least. There are no cars, trucks, telephones, airplanes, or even computers in V-town. The water and sewage systems seem to be operating fine, and there is electrical lighting, which is powered by coal (the ship that caught fire in the opening scene is hauling coal, but Will indicates it is being shipped to the city, which is very strange because British Columbia exports over $3 billion in coal annually and has the largest coal processing plant in North America). Why do we have shipping in this world, but no other forms of transportation? Are they sailing vessels? No sails are mentioned, so I would have to say no. Gasoline also is available, so, again, where are the cars? V-town seems to operate in isolation. We never hear if there are other cities, and when the city suffers an earthquake, no outside help comes to its aid. They seem completely alone. Characters discuss how the entire province of Alberta has been evacuated, but what about other towns in British Columbia or down in whatever is left of the United States?

Food is an oddity in this book. The characters eat a combination of fast food from restaurants mixed with raw meats from the fridge, and they also apparently hunt for food. (Some anthros occupy a social stratum of designated Hunters.) Processed foods must be running out, however, and it is also mentioned that, while there are still canned cokes to be had, most of them have gone flat. Perhaps Gibbs is trying to show his characters as half human/half animal in this way. Perhaps the riots are being caused by food shortages. We’ll never know.

Despite the riots and a major earthquake, the bureaucracy of the city limps along. The mayor’s office seems considerably weakened, with the fire and police departments doing most of the work in keeping V-town from descending into complete anarchy. After the quake, Will is made fire chief, and the town gets a new mayor. There is no election here; the mayor is simply appointed. I also found it odd that everyone seems to be drowning in paperwork. Paper is everywhere, and Will spends much of his time filling it out. Where the paper comes from, no one says. I would assume the paper mills are still working in British Columbia, so if I were in this world, I would invest in a paper company and make a fortune.

We get some sex scenes here and there, and if you like S&M and pup play, you might enjoy them. It isn’t really until around page 170 that we get to what seems to be the crux of the novel: a bizarre conspiracy to turn V-town citizens into half-zombie-like thralls intent on taking over the city. Anne thinks she knows who is behind it, but … well, the real mover and shaker is a surprise, so I won’t spoil it. Let’s just say the book ends with lots of action that would be appropriate for any zombie movie.

I’m sorry to say that I, personally, had a lot of problems with Gibbs’ world building and his writing in general. While it can work to tease the reader and imply things are going on that you don’t fully explain, this has to be done with skill, and there should be a payoff for the reader, eventually. We now have two full novels here in this trilogy, and the reader still doesn’t know what’s going on, how these characters came to be, what the Cataclysm was, and how anthros arrived on the scene. (A particular oddity is that, while most of the anthros come from ordinary creatures of Earth, there are two dragon scalies mentioned. Where the heck did they come from?)

The writing—and editing—of the book is weak. For example, the author uses the word “grin” 127 times. Other times, it seems like Gibbs isn’t paying attention to what he is writing. For example, in one scene we are told that it is a cloudy, gloomy day; next thing we know, a character grins and his teeth glisten in the sun. There are grammar and punctuation errors, errors in expression (“much vaulted” should be “much vaunted”), repeated phrases following one after another (“touch of her lips” and then again “touch of her lips”), sentence fragments, and so on.

Technical details are also a problem. In the first chapter, for example, Will and Davies plunge into the ocean with 100-pound (not kilograms? This is Canada!) packs of fire equipment on their backs. If you ask a SCUBA diver, they will tell you that you would probably drown with anything more than 30 pounds to carry. And what is all this fire gear anyway? When a ship is aflame, fire fighters typically start the battle with equipment aboard the ship (carbon dioxide and steam equipment is used), or they heft hoses from their own ship; they do not carry huge packs on their backs. But if this is how they work post-Cataclysm, then it would be nice to learn how these enormous backpacks are deployed.

The above could be easily corrected with better editing. What bothered me more was the loose, meandering plot. A good story is tightly plotted with events relating logically to one another. The opening fire scene and the earthquake seem to be placed merely for action. Encounters with some characters, such as Will visiting his horse friend in the hospital, also do little to advance the plot; and a mysterious wolf appears early in the book, only to disappear forever. They are not essential to the story. But what is the story? Is it the thrall plot? If so, why must we wade through 170 pages before we get to the thrust of the story? Where were they in the first novel?

If you are not a deep, discerning reader and are simply looking for an action-and-sex-filled furry tale, you may enjoy Cold Trailing. Gibbs is pretty solid writing action scenes, and his sex scenes add to characterization and the story. These things I would say are the strengths of this book. Gibbs is, however, weak in plotting and world building. In my opinion, this tale would have been much improved if he had foregone the entire Cataclysm premise and just written a tale about a furry fireman and his love and work relationships. Either that, or make this about the thralls, which should have been brought up in the first book. All I can say to Gibbs is this: with readers investing so much in the first two books, I really hope we get an explosive payoff in Book 3.

Review by Mamma Bear Guardians: Downfall is a furry military scifi novel set in the year 2776. In a time of galactic warfare, we join the story on the bridge of the UGSM Serenity, where Captain Fischer is about to launch his Goliath warship 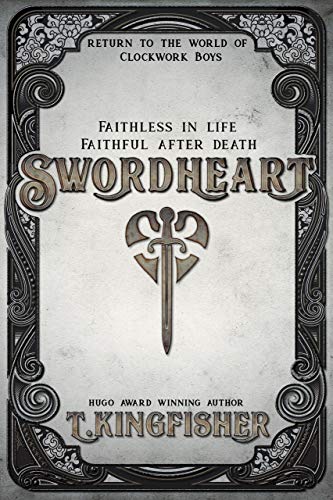 Review by Pythian If you’ve ever wondered what it’s like for a sword to be a person…wait, that’s probably not a thing one would think. Even