Camouflage is Kyell Gold’s new historical fiction novel about a young, college-aged white tiger named Danilo who finds himself supernaturally shifted to 1508 Scotland. Danilo is desperate to find a way back to his own time, but is quickly caught up in his attempts to help the underground gay community in their persecution by the Catholic church.

The story is typical of Kyell Gold with its just-finding-himself gay young-adult protagonist and the contemplative yet action-packed flow to the story. However, it differs greatly in a thematic sense from his usual fare, and caught me well off-guard with the visceral brutality through which it accurately depicts the horrors inflicted on gay men and women during the time. The scene in question made me queasy enough to set the book down and make sure I had a trash can nearby.

That isn’t a bad thing, though. After reading the scene over the three occasions it took me to get through it, I was at the same time thoroughly horrified with what just happened and newly in love with the story itself. It was a gut punch at the perfect time to break the reader (and the main character) out of the idea that Danilo’s trip into the past was a pretty little fairy tale to teach some lesson. That scene was an excellent inclusion at just the right time to tear down the reader’s preconceptions about what this setting would be.

The plot as a whole was thoroughly action-packed, including a scene of "action" that departed from Kyell’s norm. However, that scene tied into the story perfectly well, and wonderfully built up Danilo’s character.

In fact, the most impressive aspect of the story to me was how deftly the characters were handled, both those with an arc and the side-characters who interacted with the protagonist. The corollaries between the characters in the present and past were eerie in their differentiation.

The biggest problem with the story, however, is how little time we have to understand the modern Danilo before he falls backward in time. This is understandable, given that most of the conflict takes place in the past, but there was so much exposition dumped on me during that first chapter that I felt like I was drowning in backstory information. Then, once we were in the past, the information and conflict presented played a bare minimum role.

Furthermore, I personally didn’t enjoy how brutally heavy the story was starting around a third of the way in, all the way up through the climax. It felt like Danilo just couldn’t win at anything up to the point where I almost wanted to put the book down rather than see him fail again and get shoved another step backward. I love dark stories, but I personally need some semblance of small victories and steps forward to keep myself motivated.

However, despite those elements that didn’t resonate as well with me, Camouflage was one of my favorite Kyell Gold stories, and a book that I absolutely recommend. It can be tough and gut-twisting to get through, but the journey is absolutely worth it. 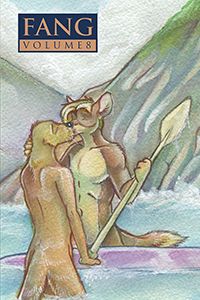 Review by Colin Leighton In 2017, FurPlanet chose to deviate from their usual custom of designating differing themes for FANG and ROAR by instead assigning their two annual anthologies the

Review by Tabsley Paradise. It’s such a wildly interpreted topic, and one that volume 8 of Bad Dog Books’ ROAR anthology series bravely tackles. The anthology was edited by