Edge Anomaly: The Spirit of Crescent Valley is artist Meg Rabbit’s first novel, and I am duly impressed. From the first paragraph, which reads like a romantic poem by Keats mixed with the wonder for nature expressed by John Muir, I was plunged into a magnificently realized fictional world that combines a rich, biological diversity with modern technology. At first, I thought this was going to be a fantasy setting similar to medieval Europe but with anthros, but then we come across tech like computers and submarines, and we realize this is something quite different.

The author’s website at edgeanomaly.com asserts that the story is for readers ages eight and older, but my feeling is that it is a bit sophisticated for audiences that young. Fourteen and up would perhaps be better, or, at least, 12 and older. The story and setting are complex, to say the least. Rabbit shows skill as a world-builder. That is not to say you’re going to see tech more sophisticated than in today’s human world, but more regarding the biology and setting of her story.

Set on a large, verdant island on, apparently, an unnamed exoplanet, the inhabitants include several species: Amphs, Avians, Forax, and Insects (although the Insects comprise different species that, interestingly, all live together in a Hive as one community). The first three are grouped together as “sentients” (even though Insects are clearly intelligent) and live together in cities, while Insects live separately. There is also another group of creatures called Rovers, which are information gatherers sent from a being called Tsoci. The concept of Tsoci is where things get particularly fascinating, as they are, basically, the living embodiment of the planet upon which all the creatures live. This brought to my mind the Gaea trilogy by John Varley in which humans encounter a living Stanford torus inhabited by species whose behavior is controlled by the world they inhabit.

The same is true with the world created by Tsoci, who is an apathetic nature goddess that creates the sentients and Insects. The species are designed to perform certain functions like cells in a living body (and yet, they are not like the Borg in Star Trek, for they have a sense of their own individuality), and Tsoci created a portal called Limbic (pun on the limbic system, no doubt) through which she sends the Rovers. As with a living body, the individual sentients can sometimes misbehave (not fulfill their purpose), and when this happens, Insects come to take them out of their homes, wipe their memories, and return them to normal function.

Enter our heroine, Edge, a Forax (she looks rather like a mix between a bat and a mustelid) who has spent her first 12 years of life living with her mother, Mana, in the isolated Far Crescent, where, as scientists, they study a nearby Hive. Edge thinks she and her mom are the only sentient animals around until she meets Jessop, a young Avian, and then Jessop’s parents, Ashmara and Harbeshi. Jessop and Edge quickly become friends, and he takes Edge to visit another friend, Xalma, an Amph living in the isolated Grotto (a small nitpicky complaint: amphibians do not have scales, Ms. Rabbit). Xalma, it turns out, is centuries old and being kept in a juvenile state as a Child Queen. Turns out that back in the city of Lymphia, Avians and Amphs are at war. Furthermore, there is a Resistance movement determined to overthrow Lymphia and its rather despotic social system that keeps the Forax as agricultural slaves.

And that, frankly, is just the beginning. Edge finds out that not only is the world a much more complicated place than she once thought, but she is a key player in what is to happen to her friends and, indeed, her entire world. She is not at all what she appears to be but has been genetically designed by her father, the priest Hiro, who lives in a city called Cowrie and is a leader in the Resistance, to possess some incredible powers.

Rabbit thus gives us two heroines, Edge and Xalma, who are living biologically manipulated lives and troubled by the burden of their predetermined fates. Add to this the godlike presence of Tsoci, who also has an agenda for the people of this world, and you have quite a sophisticated philosophical story about fate as controlled by a goddess, science, and biology. To me, that’s a bit much for an eight-year-old, but perhaps kids are more sophisticated now than when I was that age half a century ago?

Putting all this aside, you can read Edge Anomaly as a story of friendship, too. Rabbit plays all the right notes here, with Edge, Xalma, Jessop, and a Rover named Sole being sympathetic, three-dimensional, interesting, and loving people inhabiting a complex world. As more and more outrageous (sometimes frightening) things happen to these friends (and I truly wish I had more space to report the story in more detail), and they are confronted by characters and villains with grandiose ambitions for power, all these friends want to do is protect the people they love and restore their once peaceful lives.

Edge Anomaly is an intelligent and compassionate book. The author herself describes it as a “kid-friendly” story that addresses such STEM subjects as biology, philosophy, neurology, and environmental science. Furthermore, she lists her inspirations as including everything from mycology and behavioral biology to COVID and the novels Watership Down and Animal Farm.

The author writes well. Perhaps her background in art makes her skilled at composing beautiful, descriptive passages that help the reader visualize her original world. If I were to find a flaw at all in this debut work, it would be to say that her villains are rather two-dimensional, but I can put that aside because the heroines and heroes are so appealing.

When I decide to recommend a novel, it must have two things: sympathetic, three-dimensional protagonists and a plot that keeps me turning pages. Edge Anomaly qualifies on both counts. 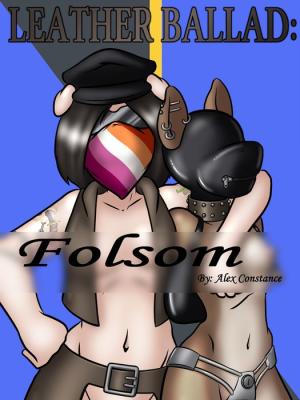 Review by Joel Kreissman Leather Ballad: Folsom, is a sequel to the first Leather Ballad by Alex Constance and, like the first book, it compiles a series of chapters previously