Pet play, possibly one of the kinks and communities closest to the furry fandom; yet, ironically, one that's not as popular or as represented as it should be inside it. The idea of getting into a different head-space, behaving in an animalistic way, or wearing gear such as collars, leashes, and harnesses should be more than familiar to your average furry; and, even then, I think this is the first work that I've seen dealing directly with this theme. In this anthology by Thurston Howl Publications, we get to explore those who love being a pup, a horse, or anything else, and those who love them in turn.

The anthology starts with what I consider to be its best: "Waggy" by TJ Minde. This is the story of Hayden and Wagner, a human/anthro couple  where the anthro, the eponymous "Waggy," helps ease his human partner into dog play when they go out on vacation. While I liked both characters and the overall emotional tone of the story, I loved more the way the author handled the kink, gradually explaining it to his partner and the reader, followed by several scenes where they put  those lessons into play. Though I have to say that the story felt a little slow at times, which is  unsurprising since (according to my Kindle) just this one is around 1/4 of the length of the whole anthology.

Next comes "The Familiar" by Linnea "LiteralGrill" Capps. In this story we follow Katherine, a girl in a rural society who must deal with her feelings for her neighbor, Sarah, but things get complicated when Sarah asks Katherine to serve as her familiar spirit. To be honest, I was quite surprised when I first read it, not only because it felt more like erotic-horror (especially in the latter parts of the story), but also because the "kitten play" in it is done in a more literal way than the rest of the anthology because of the fantasy elements in it. In fact, it reminded me more of something I could find in a collection such as Howloween.

In "Deference of Shining Joy" by Al Song we have a series of vignettes concerning Kyle, a dhole who's part of a string quartet, and his interactions with the rest of the members of this polyamorous quartet as they practice for their upcoming concert at the next "pup night." While the representation for this type of relationship was nice and all members in it were likable, I feel that  the "pet play" did not have as much of a role for the individual vignettes as it did for the collective one, and that maybe the story was a little too ambitious for the format, perhaps being better told in something longer like a novella.

Next up is "What You Really Want" by Thiger. In this story we follow an unnamed man in an unhappy marriage who discovers pony play after getting more acquainted with George, the sexy jackal that he met at the gym. While I liked the kinky-ness of both George and the overall story, and appreciated some of the later character developments that happen as it goes along, I do have to say that the relationships shown here were not really up my alley. The protagonist's relationship with his wife is not good (which is fine taking into account the context), but the one that he develops with George is not exactly what I'd call healthy either.

In a slightly similar setup we have "Good Boy" by Faolan. In this story we follow Mark, a wolf who is fed up with his work and who gets introduced into dog play by a friend of his. While the pet play community was somehow mentioned or referenced in some of the  previous stories, this is the first one where we see a hint of it thanks to Remy, Mark's friend, who offers some much needed by now  explanations on the actual mechanics of the play like the gear, what does it mean to "play," the difference with BDSM, etc. not to mention that it's the first where we can see the community as  that, a community, when Remy takes Mark to a party with other pups. This makes it great for those not as familiar with pet play, yet also could make it drag on for others that do have more experience.

Next comes "The Wingman's Pup" by Jaden Drackus. In this story, we follow Drake, a wolfox captain of a starfighter team (no, not that one) who has to learn to let go of control. For me, both its high and low points are its characters. On one hand, Drake can be a little too annoying and wishy-washy at times for my taste, especially taking into account how the pup play is in many ways his kink and not so much that of his partner. On the other hand, Wash, Drake's wingman and partner, is understanding, patient, and hot as hell; while the rest of the crew are also very supportive of  Drake, making it sweeter from that point of view but also bringing into question why the scenario as a whole was such a big problem for him in the first place.

Last but not least is "The Competition" by Thomas "Faux" Steele. In this story we follow three protagonists: a dog, a cat, and a horse; all of which ended up playing as each other's species, and just like in "Deference of  a Shining Joy," this story is divided in several parts, one for each protagonist, where the character in turn retells the story according to their point of view. While each of the PoVs has its own individual ups and downs, in general the story makes a good example of how each of these types of plays differs from each other, but it does so at the cost of some of the character development, which gets cut short because of how you basically get three short stories at the length of just one.

Overall, I won't deny that I was expecting something different when I picked up  this anthology. As a pup myself, I hoped to see more discussions on what the kink is, how it works, what the community's like, and, in many  ways, serve as a sort of introduction for the... uninitiated.  However, I can see why these stories were picked as let's not forget  that this is a pet play erotic anthology, not Pet Play 101, and on that front, it fulfills its promise. Besides, even if it had been meant to be  something more instructional, it's not like you could have each and every story going over the same  explanations over and over again. If you're completely unfamiliar with pet play and its many variants, this anthology might not be the best place to answer the many questions you might have.  But if you're already familiar with all these concepts, I can assure that you'll have a better time. As for me, I'll be waiting for Dogpile 2 to see what tomorrow might bring. 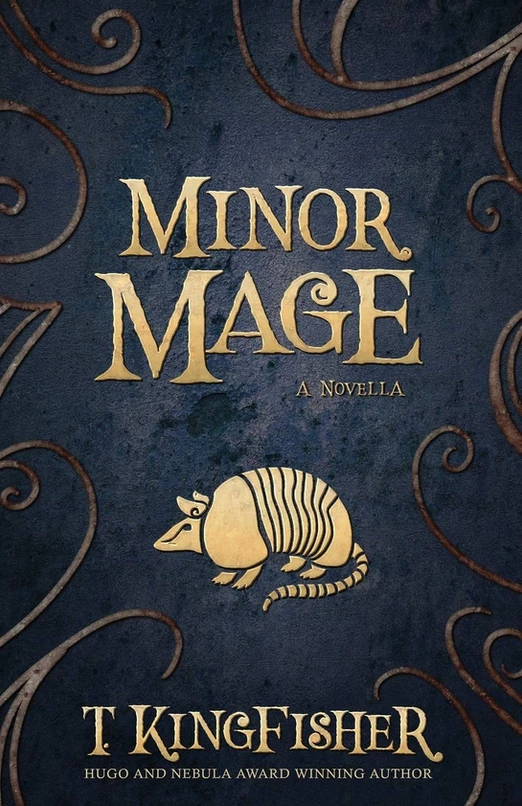 Review by Joel Kreissman T. Kingfisher’s “Minor Mage” is a fantasy novella for about a boy and his… armadillo. When an isolated farming village suffers a seemingly endless drought,

It is incredible how much the five human senses can shape the way writers describe a scene in literature. This is especially apparent in the niche realm of furry literature and anthropomorphic erotica. Sometimes, we take them for granted. The tiniest of details can